Home Prevention Under Pressure: The Causes and Risks of Ear Barotrauma 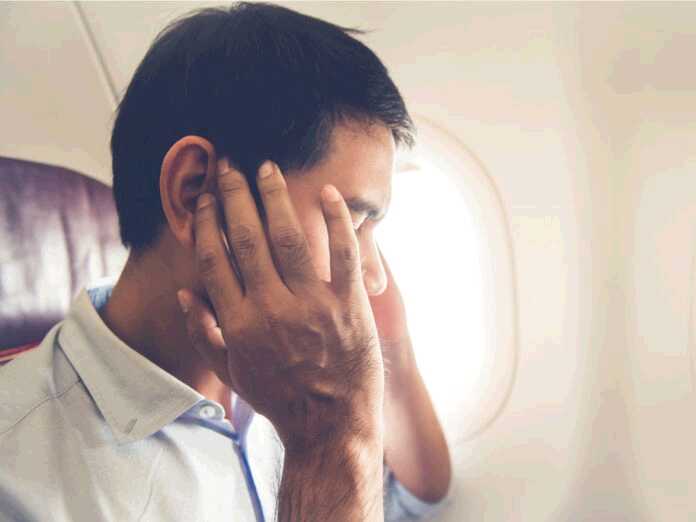 If you’ve ever sat on an airplane, you’ve probably experienced ear barotrauma. It’s the technical term for the pressure you feel in your ears when flying. As you may know, you can also get ear barotrauma when driving at high altitudes, diving, or even when using an elevator.

What is Ear Barotrauma and what are the Causes?

In each of your ears, you’ve got a tube called the eustachian tube connecting the middle of your ear with the throat and nose. Its job is to keep the same amount of air on both sides of your eardrum. At times, this tube may be blocked and during a flight, when it’s trying to regulate the air pressure in your ears, the air gets trapped. As a result, your eardrum gets sucked in and you get that pressure in your ears. Now, you know what ear barotrauma is.

In most cases, ear barotrauma doesn’t last, you may well remember your ears popping after a flight because the eustachian tube is open again. However, there are some risks.

If your ears don’t return to normal shortly after the flight, something more serious is happening. Your middle ear may be filling with fluid which can result in the following:

Seek medical attention immediately if the discomfort persists, so that your physician can treat your ear barotrauma.

Preventative measures before taking a flight are well-worth considering. You may use specially designed earplugs, chew candy during the flight, or put a few drops of mineral or baby oil into your ears before your flight. If you have a cold, take a decongestant one hour before the flight. Some people also get significant relief from breathing exercises or yawning.